Your old smartphones have now been deemed a security risk 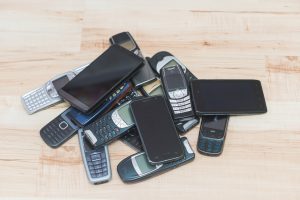 The old phones that you have shoved in the back of your desk draw may not seem like a security threat but the Trump Administration thinks otherwise. Due to the possibility of underhanded Chinese recyclers and manufacturers getting their hands on U.S. electronic waste, the Administration expressed fears in a draft rule that these recyclers could transform these devices into “counterfeit goods that may enter the United States’ military and civilian electronic supply chain.” To prevent this from happening, the Department of Commerce proposes to severely restrict the export of used electronics.

However, they would not be the first to do so. Within the last decade, there have been several proposals that have failed to gain any long lasting traction in Congress. But this time around, the draft rule may be received a little different. Columnist Adam Minter reports in a Bloomberg Opinion article that the “government’s anti-China policy and rhetoric have raised hopes among proponents of export restrictions that they have an ally in the White House.”

But America’s consumers, environmentalists and the military should hope that this is not the case. The U.S. only accounted for less than 15 percent of the global amount of tossed used electronics in 2017. With such a small amount being contributed by the U.S., a ban on such devices would only provide a very false sense of security while resulting in significant economic and environmental worry.

Minter comments that “strong developing-country markets for affordable used devices and parts – working or not – are what draw e-waste offshore. In China, used electronic traders earn as much as 80 percent of their revenues by selling devices and parts to be used as such – and not as recyclable gold, copper or other raw materials.”

In fact, many smartphones manufacturers for developing nation markets are outfitted with recovered screens and other reused and refurbished parts. Minter spoke with a Shenzhen-based dealer of used flat-panel displays who told him  “one of his manufacturing customers uses secondhand components in 10 percent of the ‘new’ production coming out of his factor, so as to preserve profit margins.” It is quite common for these types of substitutions to take place without consumers being informed, leading critics to accuse Chinese suppliers of counterfeiting.

However, this isn’t breaking news. Over the past few years, we’ve heard tons of stories about the lack of reliability and authentication of some Chinese products. But this doesn’t mean that these products aren’t well received. Minter recalls a 2012 incident where the U.S. Senate Armed Services Committee released a report revealing at least 1,800 cases in which a minimum of 1 million fraudulent parts turned up in military equipment – most of which was sourced from Chinese suppliers. Minter comments that “these counterfeit parts not only defraud the U.S. military, they impose significant security and safety risks.”

Shortly after this incident, Congress adopted legislation requiring enhanced inspections, reporting and penalties for procuring counterfeit parts. However, what was not applied were export controls on used electronics and this is simply because the U.S. would not benefit from such a rule. Instead, if applied, the U.S. would only be provided with a false sense of security to organizations that source parts in China, while imposing direct environmental costs on both countries, Minter comments.

It should go without saying that the re-use of materials (such as electronic waste) is always the better option than recycling it into raw materials. Minter comments, “The Department of Commerce shouldn’t be eager to curb [the economic benefits or re-use] in order to further the Trump administration’s anti-China strategy.”