Is Apple’s decline in the tablet industry foreshadowing an overall downfall of the device as a whole?

Apple is close to losing its dominance in tablet sales, as iPad sales are expected to decline in 2014 for the first year since it debuted in 2010. iPad sales have shrunk for three straight quarters, and last quarter Apple posted the smallest number of iPad sales in more than two years, with a nosedive of 14 percent from the previous quarter.

Can a large iPad save Apple tablet shipments?

The company is developing a larger iPad, ‘iPad Pro,’ with a 12.9-inch display it plans to begin manufacturing early 2015.

So far, tablets with larger displays have no gained all that much traction, but tech giants, like Apple, don’t want to be caught unprepared once again — as it did with large-screen smartphones compared to its chief competitor, Samsung.

Forecasts for overall global tablet shipments in 2014 dipped to 245.4 million, compared to the original forecast of 260.9 million. Overall, tablet shipments will grow 7 percent in 2014, according to a recent IDC report, the growth being substantially lower than the 53 percent year-over-year surge in 2013.

Despite the release of newer tablets, the turnover rate seems to be much less frequent than with smartphones. Recent studies also point to higher productivity employees with tablets.

The worst performers in the tablet group are 7-inch mini tablets, where sales have declined 40 percent since September.

Has the obituary for the 7-inch already been written?

Leaving behind its soon-to-be successor, the near 13-inch iPad Pro, and prosperous counterpart the phablet, the once booming 7-inch tablet seems to slowly be meeting its demise.

Phablets are predicted to reduce sales of small tablets (7-inch minis). For example, the iPhone 6 Plus has a 5.5-inch display that will inevitably reduce demand for smaller tablets like the iPad mini with a 7.9-inch screen due to overlapping functionality.

Without the benefit of two-year contract, people tend to hold onto their tablets longer than their smartphones. And as smartphones get bigger, many people find that they no longer have a need for the 7-inch screen. 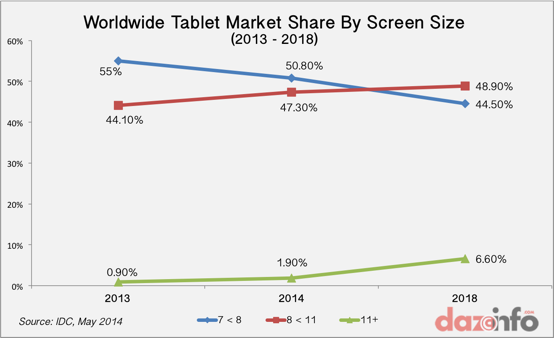 However, let us not forget tablets have only been around since 2010 with the release of the first generation of iPads. The tablet marketplace remains an immature marketplace with scarcely enough history for us to learn from. While the cell phone market has evolved and even stratified, the tablet market is a crazy quilt of different sizes, shapes and pricing.

While consumer-buying power is blurred, it is clear that tablet suppliers will migrate towards larger sizes, with shipments of models ranging from 8 inches up to 10.9 inches, overtaking smaller 7-inch-class models by 2018.

The future for tablets is to become more multifunctional than laptops and provide a bigger screen than smarpthones and phablets. The tablet marketplace will remain volatile as more apps are developed for BYOD and the mobile workforce.

A Closer Look at the iPhone 13 Lineup
September 16, 2021
Leave Comment