Why You May Want to Reboot Your Wireless Router Now 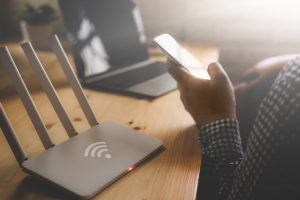 Recently, the Federal Bureau of Investigation (FBI) released a public service announcement warning consumers of a new malware threat called VPNFilter. More than 500,000 consumer-grade routers in 54 countries have been affected by the malware, which could be used for a range of nefarious purposes like collecting personal information and even rendering your router inoperable.

The newly discovered module that performs an active man-in-the-middle attack on incoming Web traffic. Attackers can use this ssler module to inject malicious payloads into traffic as it passes through an infected router. The payloads can be tailored to exploit specific devices connected to the infected network. Pronounced “essler,” the module can also be used to surreptitiously modify content delivered by websites.

And while the FBI has warned small businesses to be aware, if you’re the owner of a home router, you’ll want to take a few precautions as well. Rebooting your router will not only intercept the malware in its malicious tracks, but it will also help identify any affected devices you may have. Therefore, HOBI has provided you a few tips and tricks on how to reboot your home router.

First, let’s talk about the difference between ‘rebooting’ and ‘resetting’. Many think that rebooting and resetting a device are the same actions. However, this is a common misconception. Resetting your router will actually wipe the device of all custom settings — meaning that it goes back to its default, factory-setting mode. You can reset a device by pressing down and holding the reset button located on the router for at least 10 seconds. On the other hand, rebooting a router means literally unplugging (disconnecting) the router from the wall outlet, which will intercept malware attacks by flushing out the short-term memory of the router.

As you’ve probably heard before, using complex passwords and updating your firmware is a good practice to keep not only your information but devices safe. But what you probably don’t know is that rebooting your password every month is also a good practice. It may be a pain to do – since rebooting the router does mean you’ll have to be without internet for a few minutes, but it’s a practice that will benefit you in the long run.

Not sure how your reboot your router? Don’t worry, it is super easy to do. Just follow these three simple steps:

Boom! It’s literally that easy. Once your modem and/or router comes back online, which will probably take no more than five minutes, you’ll be all set. But please note, that if you also reset your router, you will need to go back in and change any customized settings that you may have had before the resetting process.

With the nature of malware being as it is, there really won’t be any visible indicators that your router has been attacked. Therefore, provided is a list of the known affected routers. If you have one of these in your house or business, we highly suggest rebooting and possibly resetting it to help protect your information!