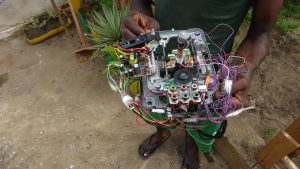 For years, electronic waste has literally become a mounting crisis in Africa. Digital dumps composed of cell phones, computers and TVs exported from Western countries are growing across the African landscape and produce hazardous gases. WoeLab, a community tech hub and innovative lab in Lomé, the capital city of Togo in West Africa, is raising awareness about e-waste by creating the first 3D printer using e-waste.

Created by architect Sénamé Koffi Agbodjinou, who also established the WoeLab, the 3D printer was made using scraps collected from old printers, computers, and scanners. Agbodjinou first had the idea in 2013 when he purchased a brand new 3D printer for the lab. “We wanted to see how we could build a new one but with our own resources,” he said to a CNN reporter.

Production of the machine took a little over a year and had the help of 50 inventors. Now, WoeLab has 20 finished products and is hoping to collaborate with other labs across Africa. Based on the RepRap low-cost 3D printing model, WoeLab’s 3D printer is capable of printing plastic objects within a size of 50cm cubed.

The inventors and entrepreneurs of WoeLabs aim to build a “digital democracy” by placing 3D printers in every school within one km of the lab to help foster technological learning. “What we are concerned with is to try to create in the young people a confidence in themselves in their capacity to realize projects,” Adbodjinou says.

As an R2, RIOS, and ISO 14001 certified company, HOBI International Inc. is proud to say that we do not export scrap material and e-waste outside the U.S. and responsibly recycle all e-waste material.