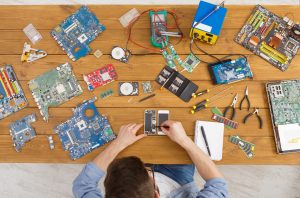 While today’s phones and laptops are only getting more difficult to repair physically, it’s at least getting easier to legally do so thanks to a new decision by the U.S. Library of Congress and its Copyright Office.

The two bodies have issued new rules that will effectively make it legal for consumers and third parties to circumvent digital rights management (DRM) software or firmware installed in electronics in order to properly repair them. Until now, these protections were exclusively in place for tractor hardware, but have recently been expanded to include a wide variety of consumer electronics, including smartphones and appliances.

The new rule went into effect on Oct. 28, therefore allowing consumers and third-party repair shops the ability to break the digital rights management technologies that are meant to stop people form tinkering with their devices.

For years, manufacturers have been fighting to keep software and hardware protected under copyright law, making it hard (if not just downright illegal) for consumers or third parties to fix devices.

Now that consumers are able to legally repair some of their devices, this could help curb the global and national e-waste crisis that plagues our tech-obsessed society. The Environmental Protection Agency said that 3.09 million tons of electronics waste was created in the U.S. in 2015 and yet more than 60 percent was not recycled. The United Nations estimates there will be more than 55 million tons of e-waste worldwide this year.

Yet even with the change, companies can still put “kill switches” in their machines allowing the company to brick the device if repair work is done by a non-authorized party, as Apple does with new MacBook Pros, according to Vice. Taking the opposite approach, Motorola announced it is partnering with iFixit—a do-it-yourself repair company—to sell repair kits directly to customers.

However, The self repairers and hackers did not win on every issue. Game console repairs are still not allowed. You cannot repair a busted CD drive on your Xbox or PS4 on your own since for security reasons these parts are locked via software to the specific console.

The ruling also applies only to specific categories so owners of vehicles such as boats or planes still are bound by the law. The ruling also does not allow trafficking in the software tools designed to circumvent software locks even in the name of repair. However, you can develop those tools yourself or people can pay you to do the repairs for them, but the tools cannot be distributed or sold to others.