Digital Wastelands: Do You Know Where Your E-Waste Goes to Die?

Dead electronics make up the world’s fastest-growing source of waste. In fact, the United States produces more e-waste than any other country in the world. And while recycling is relatively an easy task, for whatever reason many opt to simply trash end-of-life electronics. Which begs the question, where does your electronic waste go after you trash it?

The answer is pretty simple. Most U.S. e-waste is imported to lesser developed countries, where locals will dismantle units to recover specific materials, like copper wire, that they can then sell for a small profit. Dismantling everything from automobiles to mobile phones, hundreds of people, both children and the elderly, scour across impossibly vast digital dumps or sit in factories littered with e-waste. In an article published by monthly American business company, Fast Company, Adele Peters provides commentary to the series of photos German photographer Kai Loffelbein has taken over the course of seven years for his new book called CTRL-X: A Topography of E-Waste, which documents what happens to all tech gadgets that go from our hands to the dumps and workshops of lesser developed countries like China and India. 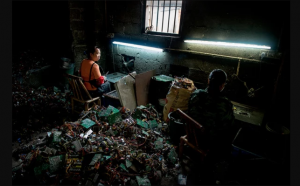 During his time in Guiyu, China, Loffelbein noticed the former rice village that was once hailed as an renowned global center of e-waste, was left barren. Back in 2005, the rural village had once had nearly 60,000 workers filling up small workshops where they would disassemble electronics. But by 2013, after the Chinese government opted to force the small workshops to join a one large industrial center for recycling, only a small number of workers were found by Loffelbein in Guiyu. Basel Action Network, a Seattle-based e-waste watchdog group that advocates the safe handling of old electronics, believe the industrial center, and a majority of its workers, have moved elsewhere in China or relocated to Southeast Asia, most likely to Thailand, Cambodia, or Laos.

Yang Linxuan, who grew up just east of Guiyu and was part of the army of people who made a living off of processing electronic waste and extracting valuable metals, told the South China Morning Post, “Every household was engaged in that business and we just did it at home and on the street… The whole town was blanketed by foul air that smelled of acid. I always felt like coughing.” Yang claims the embarrassment of frequently making international headlines for being a digital dumping ground prompted the Guangdong’s provincial government to discreetly relocate the recycling center while publicly cleaning up Guiyu to preserve the town’s livelihood and the province’s reputation.

By 2017, Beijing notified the World Trade Organization it would stop importing 24 types of waste in an effort for China to ‘stop being treated as the world’s dumping ground,’ but cleaning up the town, and China in general, means tough economic costs for towns that have specialized in waste recycling. From Loffelbein’s photo, we can see that electronic recycling is still alive in Guiyu, but it is a far cry from the days of bustling communities flooding the recycling center ready to recover materials. 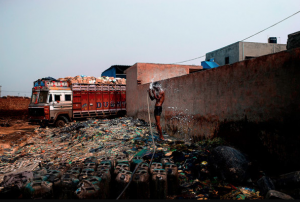 In India, digital wastelands are unfortunately all too common. Just outside of Delhi, Loffelbein snaps a picture of a man hosing himself down to remove the grime and toxic chemicals built up after a day work of extracting valuable metals from old computers and cell phones. Hidden in the shadows of the image are nearby cans of acid, used to melt plastic from boards to make the extraction of precious metals easier – even if it means the worker will be risking their own health and wellbeing. Without a doubt, this is a harrowing image to look at. However, this is the reality for many in lesser developed countries. For hours a day, no matter the weather, locals in Delhi and the surrounding area use acid and fire to extract whatever materials they can find to sell. The material that is left, which holds no value, is left to be dumped into drains, where pollutants like lead, mercury, and hexavalent chromium leach into soil and drinking water. Whether the locals participate in electronic recycling or not, the entire community near the dumps suffer from the effects.

“Wherever there’s money to be made and people either don’t have the laws in place to restrict it or they’re not enforcing the laws, you’re going to have it going to the path of least resistance and the path of externalizing costs,” said Jim Puckett, executive director of the Basel Action Network. “When I say externalizing costs, in other words, it’s cheaper to just let people bear the burden of poisons rather than properly apply cost and money to prevent harm.”

While most of the world has ratified the Basel Convention, which prohibits sending hazardous waste from more developed countries to less developed countries, this does not stop informal sectors from participating in the e-waste collection and recovery operations, which is unfortunately the case in most countries were e-waste is regularly and heavily imported. It is also worth noting that the United States is the only industrialized country in the world that has not ratified the treaty. Its hazardous waste is still getting exported to countries with fewer health and environmental safety laws.

By the end of the year, the world will have thrown out around 50 million tons of electronic waste. What’s even more concerning is that this amount is projected to grow every year by four percent indefinitely. That said, the next time you trash your end-of-life or end-of-use electronic devices, take a moment to image where it will end up and what it will become. Instead of opting for the convenient path of lumping it in with regular trash, take a moment to research certified recycling centers and companies that can properly, safely, and domestically dispose of electronic waste.

As an R2 and ISO 14001 certified company, HOBI International Inc. aims to maximize the meaning of both REUSE and RECYCLE. As environmentally conscious and responsible recyclers, HOBI inspires to promote resource preservation and effective environmental management through our services and product operations. HOBI offers services to safely and responsibly dispose of e-waste domestically. Visit our Environmental Services webpage for more information on our service offerings.