Smartphones and tablets have new competition: The MagicScroll 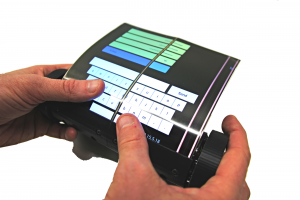 It’s time for the smartphone and tablet to move over and make room for a new mobile device. Research scientists at Queen’s University Human Media Lab have created a prototype touchscreen device called the MagicScroll that hovers somewhere in between being a smartphone and a tablet.

The MagicScroll is inspired by ancient parchment scrolls, so it takes a rolled-up, cylindrical form factor – enabled by a flexible 7.5 inch touchscreen housed in the casing. This innovative form, which was made using 3D printing, means the device can be used similarly to an old-fashioned Rolodex — in other words, there will be a physical rotary wheel built into the end of the device.

Then, when more information or a deeper dive is required, the user is able to pop the screen out of the casing to expand the visible display real estate. The flexible screen on the prototype has a resolution of 2K, which isn’t up to par with the iPhone’s Retina display but let’s not forget that the device is just in the prototype stage.

The scientists also reckon the scroll form factor offers a pleasing ergonomically option for making actual phone calls too, given that a rolled up scroll can sit snugly against the face.

Though they admit their prototype is still rather large at this stage. While still bulky at this R&D stage, the team argues the cylindrical, flexible screen form factor of their prototype offers advantages by being lightweight and easier to hold with one hand than a traditional tablet device, such as an iPad. And when rolled up they point out it can also fit in a pocket.

They also imagine it being used as a dictation device or pointing device, as well as a voice phone. And the prototype includes a camera — which allows the device to be controlled using gestures, similar to Nintendo’s ‘Wiimote’ gesture system.

In another fun twist they’ve added robotic actuators to the rotary wheels so the scroll can physically move or spin in place in various scenarios, such as when it receives a notification.

“We were inspired by the design of ancient scrolls because their form allows for a more natural, uninterrupted experience of long visual timelines,” said Roel Vertegaal, professor of human-computer interaction and director of the lab, in a statement.

“Another source of inspiration was the old Rolodex filing systems that were used to store and browse contact cards. The MagicScroll’s scroll wheel allows for infinite scroll action for quick browsing through long lists. Unfolding the scroll is a tangible experience that gives a full screen view of the selected item. Picture browsing through your Instagram timeline, messages or LinkedIn contacts this way!”

“Eventually, our hope is to design the device so that it can even roll into something as small as a pen that you could carry in your shirt pocket,” he added. “More broadly, the MagicScroll project is also allowing us to further examine notions that ‘screens don’t have to be flat’ and ‘anything can become a screen’. Whether it’s a reusable cup made of an interactive screen on which you can select your order before arriving at a coffee-filling kiosk, or a display on your clothes, we’re exploring how objects can become the apps.”

But the MagicScroll isn’t the only innovative device coming to markets. Recently, South Korean tech giant, Samsung, told CNBC that the company will be releasing the first ever foldable screen later this year. And with the Apple keynote less than a week away, we get the feeling that the mobile industry is about to take mobile devices to the next level.