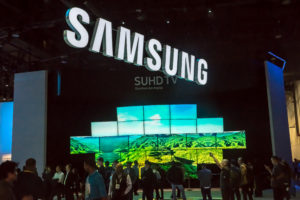 Samsung plans to reveal the new Galaxy S8 device this Wednesday. With a delayed release date, and the high-profile failure of the Galaxy Note 7, Samsung has big shoes to fill in the upcoming device launch.

The Galaxy S8 and S8+ devices are rumored to have 5.7-inch and 6.2-inch screens, with edge-to-edge screens and rounded sides. The device no longer has the traditional center home button, and now relies on fingerprint unlocking on the back of the device, similar to Google’s Pixel. The device supposedly will keep the headphone jack, but swap micro-USB for USB Type-C, and come in black, grey and silver.

Another highly-anticipated feature of the new device is Bixby, Samsung’s version of the virtual assistant similar to Siri or Alexa. Samsung confirmed the Galaxy S8 will have a Bixby-specific button to reduce friction when introducing the new AI.

As for security, Forbes reports the device features fingerprint unlocking and gesture recognition capabilities so that users can program specific gestures to access certain apps, as well as an iris scanner for added security controls.

The Galaxy S8 reveal could finally put Samsung’s Galaxy Note 7 debacle in the past. The new device will finally be revealed this Wednesday, and is rumored to be officially released April 21.