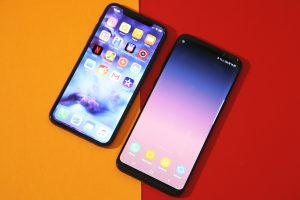 Since last year’s introduction of the ‘thousand dollar iPhone,’ we’ve heard various accounts that consumers are looking for cheaper handset options. Whether it’s opting for refurbished and used devices or simply keeping their current smartphones for a longer period of time before upgrading, headlines all over are reporting that consumers are looking into all other options but shelling out some serious coinage for a single device. However, data from a recent press release from Counterpoint Research indicates that all the chatter about smartphone users wanting cheaper devices is totally delusional.

For smartphone sales in May, Counterpoint Research’s model sales data depicted Apple as being in a virtual tie with Samsung, supposedly winning back the top smartphone model crown after iPhone X had fallen behind Galaxy S9 Plus unit shipments in April. However, the firm’s numbers actually present a very different picture.

The data looks at five different handset brands: Samsung, Apple, Xiaomi, Huawei and Vivo/OPPO. Currently, Samsung has two flagship models on the market that made it into the top ten (S9 and S9 Plus), meanwhile Apple has three (iPhone 8, iPhone 8 Plus, and iPhone X), Xiaomi has two (Redmi 5A, Redmi 5 Plus and Redmi 5 Note), Huawei with one (P20 Lite), and Vivo/OPPO with two (Vivo X21, OPPO A83). Please note that Vivo and OPPO are two brands within China’s BKK.

Looking at the data, Apple (as a brand) has actually dominated the market. The company’s top three flagships represent just over 36 percent share of the world’s top ten handsets by units. Beating out Samsung over ten percent — and with Apple beating out all other brands despite these brands having much cheaper models in comparison to Apple, researchers have come to the conclusion that consumers really aren’t all too concerned with the high prices of their smartphones.

One might think that we could just chalk it up the prestige of the Apple brand, however, if this were true then Apple’s lower priced iPhone models would be top sellers. However, this is not the case. In fact, as you can see from the chart above, none of Apple’s lower priced iPhone models: the 7, 7 Plus, 6s, 6s Plus, and the cheapest model ever offered by the tech giant: iPhone SE did not make the top ten global units by volume.

In fact, it’s pretty regular for a majority of Apple’s customers to opt to buy the newest model year, regardless of discounts up to $100+ on previous generations of iPhones. It is also worth noting that most did not expect much out of iPhone X sales, let alone that it would be Apple’s volume sales leader. The company positioned itself as being a high-end “concept phone” showing its intent for the future, albeit one that users could opt to pay a premium to buy right now and experience the company’s vision for the state of the art technology.

Even when sales for the iPhone X took off, there were tons (and still are) reports of Apple being crippled by the market price of the phone as well as reports that claimed the tech giant would not be able sell the billions of dollars worth of iPhone Xs they had manufactured during the launch of the phone. Which could not be further from the truth. Week after week following the phone’s market introduction, the iPhone X ended up being the most popular iPhone in weekly sales across quarter after quarter.

Therefore, it’s pretty safe to say that when it comes to technology, price may be shocking but it won’t deter some from making a purchase. In fact, when you think about it, new high-end technology makes consumers more inclined to make a purchase.