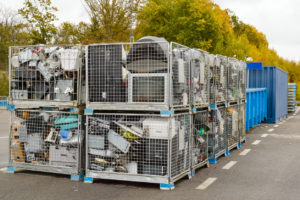 Recently, more businesses have been under fire for improper e-scrap disposal, with the latest being a popular retailer. TJX, parent company of T.J. Maxx, Marshalls and HomeGoods, has been ordered by a judge to pay $2.05 million for unlawful disposal of hazardous waste including e-scrap and batteries in California.

The Massachusetts-based company is required to hire at least one California compliance employee to oversee its hazardous waste program under a stipulated judgment submitted to the court by prosecutors and TJX companies. In addition, TJX will be audited to ensure materials are properly disposed of. The company was accused of putting hazardous waste such as aerosol cans, batteries, electronic devices and cleaning agents into trash bins according to a press release. The press release also noted that this is the second time TJX has been ordered by the state to pay for improper disposal, stating that in Sep. 2014 state prosecutors “resolved similar violations for which TJX paid $2,777,500 in civil penalties and costs.”

E-waste is classified as toxic waste and can be extremely dangerous not only to the environment but to people as well, which is why proper e-waste disposal is critical for companies that generate large amounts of waste. Unlike other forms of waste, electronic waste cannot be thrown out with municipal waste. When e-waste is sent to landfills for long periods of time, chemicals in the metals leak into the soil and contaminate groundwater. Eventually this will contaminate the surrounding water supply, including the drinking water for those living in nearby areas. If exposed for too long, these chemicals can cause severe, and sometimes fatal, illnesses. E-scrap also typically includes batteries, which can be dangerous on a different level. Many electronics are made with lithium-ion batteries that are known to combust when damaged. Improper disposal could lead to chemical fires that are difficult to extinguish and can even re-ignite.

End-of-life facilities like HOBI eliminate the risk altogether by collecting e-waste and ensuring it is properly disposed of. E-waste recycling mitigates any environmental liability, as well as any potential water contamination and fire risks.

TJX has since made a statement claiming the company is working on a number of new programs for better waste management and “have made a significant investment in time, processes and resources to strengthen our regulated waste disposal program.”

For more information about HOBI’s ITAD services call 817-814-2620, or contact HOBI at sales@hobi.com.