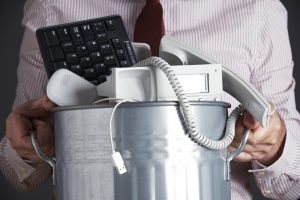 A recent study published by the Journal of Industrial Ecology pulls from multiple data sources to calculate weights of different materials that end up in landfills. It was conducted by researchers Jon T. Powell and Marian R. Chertow, from the Yale Center for Industrial Ecology. Based on their findings, they estimate 3.5 million metric tons of electronics ended up in U.S. landfills in 2015, which is significantly higher than estimates published by the government.

The discrepancy is “likely a function of the measured nature of our source data and the scope of materials in our data, which covers all electronic devices,” the researchers wrote. “Disposal quantities of e‐waste in previous U.S. and global estimates are also often inferred rather than measured, owing to limited available data.”

For their study, the researchers used a new model to estimate disposal weights. According to their report, it triangulates measurements spanning 1,161 landfills and 15,169 solid waste samples collected and analyzed at 222 sites across the U.S. In contrast, the EPA uses what’s called a materials flow methodology that relies on a mass balance approach. It relies on data gathered from industry associations, businesses and government agencies, supplemented by waste characterizations and research reports from governments, industry or the press.

In their report, researchers Powell and Chertow suggested that, in addition to using existing recycling and reuse outlets, dedicated sections of landfills could serve to store large amounts of scrap electronics for future recovery. They cited a previous estimate of the large volume of rare earth elements within electronics in landfills.

Storage at landfills would be “a stopgap approach until rare earth and other material extraction technologies get closer to economic viability and collection systems for discarded electronics are improved,” he wrote.