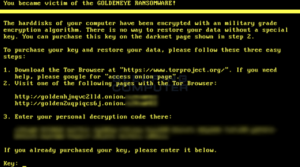 A new ransomware attack is running rampant across PCs worldwide. The malware, identified as a type of Petya ransomware, began targeting organizations worldwide Tuesday morning. This attack follows the high-profile WannaCry ransomware attack during May that affected more than 200,000 computers.

Bitdefender identified the strain of ransomware of GoldenEye. This type of ransomware is especially dangerous because it operates on two levels of encryption and locks a device’s files as well as its hard drive.

The malware also hosts a hidden Trojan that hijacks the device owner’s usernames and passwords to various accounts. Once the ransomware has accessed the device, the computer restarts, and the victim sees the ransomware’s demands immediately. Users are demanded $300 in bitcoin before they can access their device once again.

Organizations worldwide were attacked, including in the U.S., but the focal point seems to be Ukraine. The source of the attack has not been revealed.