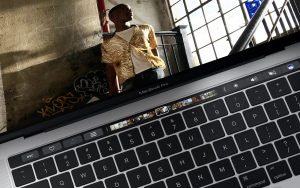 “Hello again” was a key theme in both the original Macintosh and the iMac’s debuts. Once Apple revealed the initial event invitation, speculation of new Macs gained even more traction.

Two of the main rumors regarding the new Mac update include a “magic toolbar” second OLED display that would replace the function row on the keyboard, and a second mini touch screen above the keyboard that would correspond to each app.

Along with the Magic Toolbar and mini screen, the new 13 and 15-inch MacBook Pros are rumored to be thinner, utilize USB Type-C reports and a Touch-ID sensor dubbed the “Smart Button.”

The event takes place at Apple’s Cupertino campus, but will be livestreamed beginning at 1 p.m. ET October 27.