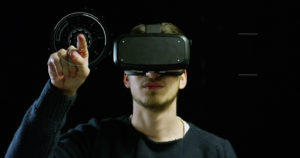 With so many people working from home these days, office life is quickly becoming obsolete. Many people miss the work atmosphere, but Facebook’s new virtual office app might be the answer to reinventing office life from the comfort of your own home.

Facebook’s CEO Mark Zuckerberg launched Horizon Workrooms, a virtual reality application that allows users to personalize avatars and interact with colleagues in a virtual work setting via the company’s Oculus Quest VR headset. The app also allows users to change the setting to accommodate brainstorming sessions or presentations. In an exclusive interview with “CBS This Morning”, Zuckerberg explained the new app and the possibilities of VR in the future with host Gayle King in a virtual reality interview, where he demonstrated how the app works.

“So you can kind of think about it as, instead of being an internet that we look at, it’s an internet that we are a part of, or that we can be inside of,” Zuckerberg said. He explained the idea of a virtual reality outside of reality, or a “metaverse,” a place where people can interact with one another without actually being together. Such ideas are portrayed in movies such as Ready Player One, where the protagonist sets out to win a competition in order to save the Oasis, the virtual reality world in which he lives most of his daily life. Zuckerberg had thoughts of a virtual reality when he was in junior high and pondered a world in which he could play with his friends without being physically present. The idea may be an introvert’s dream come true, but others are questioning certain aspects such as cost, and motion sickness from being in a virtual setting for so long.

The Oculus Quest 2 headset is reportedly less expensive than the company’s first VR headset, priced at $299 per headset, not including other amenities. However, Horizon Workrooms would allow those without headsets to join and appear as a video call to those in the virtual workspace. In regards to motion sickness concerns, the company has mentioned ideas of implementing depth changes that would help curb motion sickness in the future.

So what does this mean for e-waste? Implementation of virtual offices into everyday life will result in an increase in demand for VR technology, creating more electronic trash. ITAD companies like HOBI International Inc. are becoming more important as the world grows more revolved around technology.

Finding a clean, and environmentally friendly way to dispose of the increasing electronics that will eventually be discarded is the only way to achieve a sustainable future. For more information on ITAD services, contact HOBI at sales@hobi.com.