Today commences the 19th year of America Recycles Day, a day devoted to educating and promoting recycling amongst citizens and communities around the country.

This afternoon, Robin Wiener, ISRI President, joined the Congressional Recycling Caucus and Keep America Beautiful in the annual State of Recycling Address. The address detailed the recycling’s impacts and developments in America throughout the years.

Brenda Pulley of Keep America Beautiful highlighted new research from the Environmental Protection Agency (EPA) that indicates overall recycling growth nationwide. According to the EPA’s 2014 Materials and Waste Management in the United States Facts and Figures report, the overall recycling rate rose from 34.3 percent in 2013 to 34.4 percent in 2014. 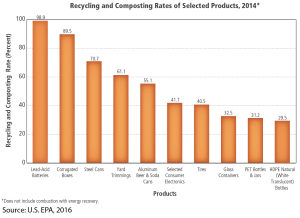 A graph issued from the EPA’s research indicates almost 42 percent of consumer electronics in 2014 were recycled and composted. With the overall increase in awareness regarding e-waste recycling methods, this reported number is bound to increase in the 2016 report.

The State of Recycling Address concluded with future goals for America’s recycling efforts. With events such as America Recycles Day, recycling will soon become a priority in households and communities across the nation.