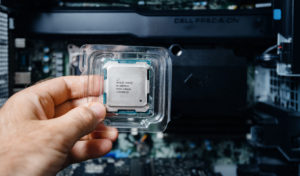 In July the processor giant Intel previewed a chip the company has been teasing since the beginning of the year at its 2021 Architecture Day event, and made promises of hybrid CPUs for desktops and laptops. Months later the 12th Gen Alder Lake chip is finally here, and boasted by the company to usher in a new era of Intel chips. Leading the lineup of new chips, the Core i9-12900K CPU Intel promises is the world’s best gaming processor.

Capable of reaching speeds of up to 5.2GHz, the Core i9-12900K offers 16 cores and 24 threads. Compared to Intel’s 11th gen chips, the company also promises a 19 percent performance improvement. Following the Core i9-12900K is the Core i7-12700K, which offers 12 total cores, and the Core i5-12700K offering a total of 10 cores. Each chip is available in a KF variant, free of the integrated Intel UHD Graphics that typically result in higher pricing. The new chips are an introduction of support for more advanced standards in the future. The chips also offer up to 20 PCIe lanes, and support for DDR5 memory up to 4800MT/s, as well as larger L3 and L2 cache sizes. One drawback that may turn off customers looking to spare money is that Alder Lake requires a new motherboard built on Intel’s new Z690 chipset. The Z690 includes updates such as Wi-Fi 6E support and faster USB 3.2 Gen 2X2 data transfer. Because of the company’s use of a new LGA 1799 socket, a new cooler may also be necessary.

Since the 6th Gen Skylake chips first introduced in 2015, the Alder Lake series are the first Intel desktop chips on a different process. Unlike its predecessors on the 14nm process, the 12th Gen chips will be released on the rebranded Intel 7 process. According to Intel, the Alder Lake lineup is a new approach to x86 chips for the company, and many more plans for the Alder Lake architecture are in the works. After the disappointment surrounding the 11th Gen desktop lineup due to architectural differences and poor performance, the new chips may be a chance for the company to redeem itself, as well as its products.