This is not a ‘phad.’ Phone/tablet hybrids, or phablets, are on pace to out ship PCs this year and tablets next year, according to a forecast from International Data Corp (IDC).

The rise of phablets and consumers’ willingness to hang on to their current devices are slowing down the tablet market, says IDC, who further defined phablet as a smartphone with screen size of 5.5 to 7 inches.

Will one phablet rule the mobile world? 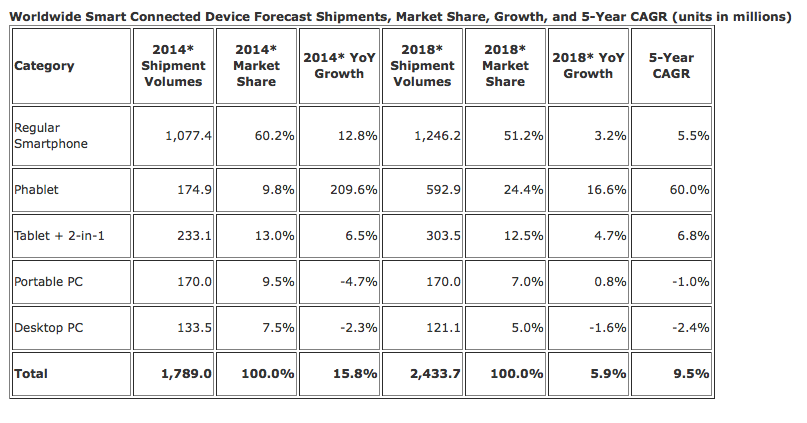 The rise of phablets is causing many people to subsequently second-guess their initial tablet purchases as the larger screens on these smartphones are often seen as adequate for tasks once reserved for tablets.

This unexpected shift from tablet to larger-screened smartphones is welcomed with open arms by vendors with a model already on the market as the average selling price currently remains roughly 50 percent higher than it’s sub-8-inch counterpart.

With Apple expected to join the space introducing its iPhone 6 models – one with a 5.5” display – it is anticipated even more spotlight will be on phablets as larger screen smartphones become the new norm.

Another lucky movement for Apple and its plans for a large iPad with a 12.9-inch display, is just as phablets have applied pressure on smaller tablet sales, IDC predicts consumers’ next tablet purchase will shift back toward a larger-sized device.

So far, tablets with larger displays haven’t gained all that much traction, but Apple likely doesn’t want to be caught unprepared once again — as it did with smartphones compared to its chief competitor, Samsung.