How e-waste encourages competitors to collaborate 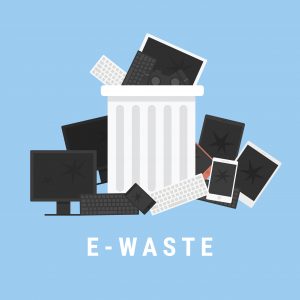 Most of the time, when we’re finished using the things we buy, it’s our responsibility to dispose of them in the correct manner. However, for consumers within the EU as well as 25 states in the U.S., there happens to be one notable exception to this rule-of-thumb guideline: electronic waste. When e-waste is involved, manufacturers of electronic products are required by law to arrange for the end of the items’ lifecycle. The general term for this kind of regulation is called ‘extended producer responsibility,’ or EPR. The EU was the first governmental organization to implement EPR, with its 2002 Waste Electrical and Electronic Equipment Directive. The following year, states in the U.S. began enacting their own forms of product stewardship legislation.

That said, recycling electronics is not easy or cheap task — especially given how complex and sophisticated electronics are quickly becoming. In fact, the process benefits from economies of scale has led to some unlikely partnerships. In order to recycle electronics in the most efficient method, competing manufactures have formed coalitions. To name a few, Gillette, Braun, Electrolux, and Sony are among the top tech names that have teamed up to create the European Recycling Platform.

Associate professor and Bundy Faculty Fellow at Tuck, Laurens Debo, weighs in on these uncommon coalitions and comments, “They’re competitors in the primary market and collaborators in the recycling market… They kill each other on one side, and work together on the other [side].” For Debo, these partnerships are important to understand—if they’re successful, they could result in high rates of recycling and the lowest possible cost to consumers. And if the partnerships fall apart, e-recycling may suffer, and consumers will be paying more, since individual firms will end up recycling on their own at a higher cost per unit.

However, the question is: what are the optimal conditions for long-lasting e-recycling coalitions? Debo, along with co-authors Fang Tian of Pepperdine and Greys Sosic of the University of Southern California, studies this question in a new working paper titled “Manufacturers’ Competition and Cooperation in Sustainability: Stable Recycling Alliances.”

To learn more about recycling strategies, the authors use two models: asymmetric manufacturing (where two firms recycle three products) and symmetric manufacturing (where two firms recycle four products). They analyze these models in two hypothetical settings: where the government dictates how firms recycle (which is the “social problem”), and where the government allows firms themselves to decide how they will recycle ( which is the “endogenous problem”).

The researchers belief that if the government gets a handle on how to control the manner in which firms recycle, the “product-based” recycling structure generates the highest welfare. This is the point where firms should partner with their competitors to recycling similar products together. Creating a homogenous waste stream will streamline the efficiency of recycling. But if there are economies of scale to leverage, the firms will either outsource to, say, a mobile phone recycler, which is a “market-based” solution, or to a company that recycles all forms of e-waste, which is an “all-inclusive” solution.

Similarly, the results do not differ much in the endogenous problem format, where the product-based, market-based, and all-inclusive strategies are still the most stable. However in this format, there is one notable exception: when market competition heightens with one dominant firm on the market, a different type of structure is likely to emerge. Under these conditions, firms may choose to forego a coalition and recycle on their own, as a strategy to hurt their competitor.

Debo and his coauthors hope to make regulators aware of the possible consequences of different implementations of EPR. “Society benefits most when firms form coalitions to reduce the cost of recycling,” he says. “But where firms have an incentive to recycle on their own, perhaps that’s when government should take a keener interest in the outcomes.”