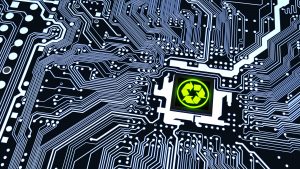 Provided is a weekly snapshot of the recent electronic waste, technology and mobile related news that HOBI’s blog reported during the week 9/17-9/21.

Apple’s latest lineup of iPhones will try to help reduce the e-waste crisis. In a highly connected world, it can be difficult to stay green and practice sustainability efforts. However, after completing a switch to 100% green energy earlier this year, Apple is trying to pack even more renewable materials into its latest iPhones by using recycled materials. The new phones will also use 35 percent post-consumer recycled plastic in their speaker enclosures, and 32 percent bio-based plastic for the frame around the cover glass. Another green initiative the company is taking is when users decide that it is time to replace their iPhones, Apple will recycle them for free and offer trade-in credit if the phone has any value.

Wireless carriers prep for the aftermath of  Hurricane Florence

In the aftermath of Hurricane Florence, wireless carriers are taking the necessary steps to ensure that networks and towers stay connected for those affected by the storm. Wireless providers’ response has significantly grown in importance, with more than 52 percent of homes exclusively owning wireless phones, according to the National Center for Health Sciences. All the major carriers:  AT&T, Verizon, T-Mobile and Sprint are beginning of prep for the storm by deploying an invasion of support crew and high-tech machinery to repair and restore connectivity.

Researchers at Yale University have found information that indicates e-scrap disposal estimates are higher than what has been published previously. Based on their findings, they estimate 3.5 million metric tons of electronics ended up in U.S. landfills in 2015, which is significantly higher than estimates published by the government. This estimate includes small electronics and home appliances. Using a different methodology, the U.S. EPA calculated 1.7 million metric tons of e-scrap having ended up landfilled or burned in 2015, with a reported 40 percent recycling rate for electronics. Meanwhile, the federal agency data separated consumer electronics from appliances.

Since society is moving towards an IoT influenced lifestyle, listening to tech rumors can be pretty fun. After all, we’re always ready to see what new tech gadget we can integrate into our daily lives, right? To help keep you updated with the current rumors, provided is a list of which rumors are probably more than just speculation. From Apple’s AirPower charger to Apple’s possible switch from the lightning port to the USB-C to a comeback device for Palm and of course the latest on Samsung’s foldable handset, here are the rumors that all tech lovers are looking forward to.