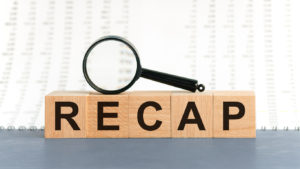 Below is a recap of this week’s blog posts including the importance of recycling your old devices before you upgrade, an update to Pennsylvania’s EPR program, details regarding California’s plan to ban gas powered vehicles, and how passwords may become a thing of the past.

Recycle Your Old Devices Before Upgrading

Earlier this month, Samsung held an event to announce new products, and Apple recently announced the date for the fall keynote, which will formally announce the iPhone 14 and many more highly anticipated products. It’s that time of year we start wondering if a brand new smartphone would be worth it, maybe a new laptop for Christmas, or perhaps the office IT hardware could use an upgrade. However, as tempting as it may be to purchase new devices, remember how important it is to reduce electronic waste.

States across the country have passed legislation working toward more sustainable solutions, and a Pennsylvania lawmaker recently introduced a bill that would update the state’s extended producer responsibility program for electronics. After a Michigan lawmaker introduced a bill updating the state’s EPR program, Senate Bill 1310 was introduced by state Dem. Sen. Amanda Cappelletti, and would update Pennsylvania’s current recycling program.

In 2020, California Governor Gavin Newsom introduced an ambitious plan to ban the sale of new gasoline-powered vehicles in California by 2035 in order to address climate change. The plan was initially met with opposition, but has since gained more support and was recently approved by the state. The decision was made Aug. 25 at a meeting in Sacramento when the California Air Resources Board (CARB) voted to formally adopt the rule.

Are Passwords Being Replaced?

Passwords have been the standard for keeping data protected for years. During the last few years technology has evolved, and developers created Touch ID as a more secure method of data security by removing the need to type in a password. Now it seems as though passwords are on their way out altogether. FIDO Authentication technology has taken it a step further and removed the need for a password at all. Soon the days of creating a dozen unique passwords only to forget them all will be ancient history, replaced by the development of passkeys.