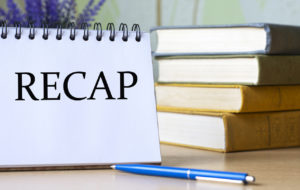 Below is a recap of this week’s blog posts including how you can maximize value in IT assets through mobility managed services, an E-scrap bill that was recently signed into law, Amazon’s recycling page and a quick safety reminder sparked by a landfill fire.

Maximizing Value in IT Assets Through Mobility Managed Services

Electronic waste makes up 70% of the world’s toxic waste, which is why some enterprises choose to recycle their old IT assets. Recycling IT hardware ensures that it will not end up in landfills and pollute the environment, however, many IT assets still have some use left even after disposition. Everyone updates IT equipment at their own pace, and many people dispose of electronics before they stop working, whether it’s due to a malfunction or a desire for a newer model. This provides an opportunity to maximize the value of their IT assets through mobility managed services.

More states are proposing recycling and e-scrap bills, and several states are making significant progress. South Carolina’s House Bill 4775 first passed the state House of Representatives and the Senate back in April and May before being delayed after the House claimed the Senate attempted to link an unrelated bill and rejected it. After a month in conference committee, the amended version without the addition has finally been passed and signed into law.

Amazon is known for having anything and everything you could possibly need, as well as their speedy delivery methods. However, what many customers do not know is that Amazon will also recycle your small devices for free. After making their recycling page more accessible to users, the company launched the page and it has since drawn much attention. Electronics recycling is a topic most never consider, but recycling your old electronics is extremely beneficial to the environment, as well as human health.

A fire broke out in Rapid City, S.D. July 14 evening at a landfill recycling building possibly due to the disposal of flammable materials. In just four hours 40 tons of trash was engulfed by the flames. Thanks to a timely sprinkler system, the building itself never caught on fire and was able to be saved, however, the incident has influenced officials to remind the public about the dangers of flammable materials such as Lithium Ion batteries, hot coals, hot liquids or fireworks being placed in landfills. The cause of the fire has yet to be determined, but the incident follows two lithium ion battery fires reported in a two-week span, and officials have taken the opportunity to remind everyone how common they are.