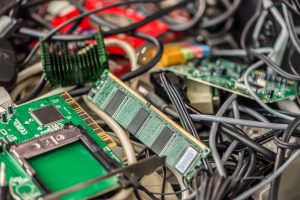 Provided is a weekly snapshot of the recent technology, e-waste, GDPR, and data security news that HOBI’s blog reported on during the week 4/23-4/27.

Study Points Out the Benefits of E-scrap Economies

A recent report compares the cost of e-scrap processing against virgin mining, and their findings seem to indicate recycling is the more efficient option for some key metals. Focused on China, which is projected to be a larger generator of e-scrap than the U.S. or any European countries in the years to come, the report analyzes the costs associated with virgin mining for copper, lead, steel, aluminum, gold, and silver compared with the costs of recovering commodities from CRT monitors and printed circuit boards. On a global view, the study found e-scrap recovery provides significantly lower costs in relation to global market prices for copper and gold. Finally, the study notes that labor costs for e-scrap recovery change over time due to a “learning process” as companies figure out how to most efficiently process materials.

More companies are ditching passwords and adopting the use of fingerprint scanning and other biometrics to help thwart malicious users from hacking their databases. Employees are increasingly using biometrics to unlock company IT assets, like phones and computers, and to access data stored on those devices and in the cloud. But passwords are still widely used and one benefit is that they’re easy to change if they’re stolen. But you can’t change your face or fingerprints when your biometrics profile is stolen. While it’s unclear for now the extent of what hackers can do with fingerprints, experts worry that if they’re adopted widely for authentication, it could lead to widespread identity theft.

With just more than a month left, companies are still rushing to become compliant with the EU’s General Data Protection Regulation (GDPR), which goes into effect May 25. However, many organizations that will be affected by the GDPR seem to only be focused on the storage of personal data when there is so much more that needs to be changed to ensure compliance. One such factor being overlooked is proper and compliant e-waste disposal. In fact, recent e-waste figures suggest that there is a lack of will among enterprises to manage the problem. But, this could all change as reports claim the GDPR could be the tipping point to convince organizations to deal with the growing problem of electronic waste.

April 25, EY announced Cathy Hill, CEO, and Craig Boswell, President of HOBI International, Inc. as finalists for the Entrepreneur Of The Year® (EOY) 2018 Award in the Midwest. The awards program recognizes entrepreneurs who are excelling in areas such as innovation, financial performance and personal commitment to their businesses and communities. The business leaders were selected by a panel of independent judges. Award winners will be announced at a special gala on Wednesday, June 13, in Chicago. The EOY award is the world’s most prestigious business award program for entrepreneurs and celebrates those who are building and leading successful, growing and dynamic businesses, and recognizes them through regional, national, and global award programs in more than 145 cities and more than 60 countries.

How to Restrict the Amount of Data Apps Collect From You

In the wake of the latest Facebook controversy, many are wondering just how many organizations are accessing their personal information without their knowledge. As we’ve all have probably heard, Facebook and Cambridge Analytica are under fire for allowing user data to be collected and used in ways it shouldn’t have been, to track and target user’s political opinions. For its part, Facebook has called the incident “a breach of trust” and says it has already put tighter restrictions in place to stop this from ever happening again. Wherever the blame lies, plenty of us are now reassessing the deal we make when we sign up for services like Facebook, Instagram, and Twitter. If you’re wondering what kinds of information you’re giving away to the apps you use, provided are a few tips on how you can limit the amount of data apps collect from you.