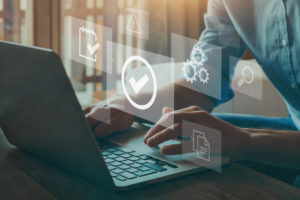 Below is a recap of the past week’s blog posts including the new Self-Service Repair program Apple recently announced, a recycling bill passed by the House in early November, a study conducted revealing the value of the recycling industry, and some tips for recycling electronics during the holiday season.

For the last few years the Right to Repair Movement has gained traction with many different companies in efforts to protect customers’ right to repair their own devices. Famous for its sleek, expensive products, Apple has publicly lobbied against the movement for years, and refused to release any information on repair for their products. The company’s restrictive repair policy has caused an uproar for customers who end up spending just as much, or more to have Apple repair their devices, or end up having to purchase new devices entirely. However, Apple has recently taken a turn on their repair stance. According to The Wall Street Journal, the company is set to release a new Self-Service Repair program by early 2022.

August the Senate passed a $1 trillion infrastructure bill, the INVEST in America Act, focusing on construction improvements, communications systems, and environmentally sustainable energy. The bill was passed by the House on Nov. 5, and officially signed into law by the president. In a 228-206 vote, many are pleased that the importance of environmental sustainability has finally made progress.

Recycling has become prevalent almost everywhere, though for most it may still appear as if the long-term results are slim to nonexistent. How can we be sure that recycling is even helpful? What are the actual benefits of tossing an aluminum can in a separate bin than plastics? Recently, a study was conducted for the Institute of Scrap Recycling Industries(ISRI) by John Dunham & Associates (JDA) showing exactly how much of an impact recycling truly has. The 2021 Economic Impact Report shows that the activities of the recycling industry in the United States generates around $116.84 billion annually in economic benefits. As the sixth analysis in a series of studies beginning in 2011, the scrap recycling industry has expanded from 137,635 jobs to 159,640 jobs at more than 12,000 facilities across the nation.

Tips for Retiring IT Assets During the Holidays

With the year coming to a close, and 2022 quickly approaching, it’s probably around that time to upgrade your electronics. Whether you’re searching for a new laptop for research papers, switching out office hardware, or catching the newest smartphone before the sales end, it’s important to know how to properly dispose of your old electronics. IT asset disposition is often glazed over when shiny new devices are ready for installation, but disposing of IT equipment is extremely important for personal health, as well as the environment. Below are some tips for upgrading and retiring old electronics this holiday season in an eco-friendly manner.