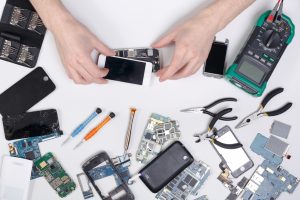 Just a few years ago, many would have never guessed that the refurbished phones market would grow to be the size that it is today. As early as 2013 we began to hear inklings of people being interested in a refurbished phone market despite a majority feeling skeptical at the such a market becoming successful. And just three years later, in 2016 the refurbished smartphone market was declared a $17 billion global market by Deloitte, a highly accredited accounting organization.

By the end of 2017, the market was worth roughly $19 billion, and the updated five-year forecast from IDC reports that it would continue to grow at a year-on-year rate of 10 percent by 2022. The growth in the used phone market has been linked to the noticeable slowdowns that the smartphone market has been experiencing recently, growing just a mere 3% last year, which is a huge departure from its growth rate in previous years. There are multiple reasons for this trend, but experts point to three major causes:

Upgrade cycles are getting longer at a much faster rate than analysts previously predicted. The used smartphone markets used to have cycles about 24-24 months long, but now they’re pushing towards cycles of about 27 months and 28 months.

This movement has steadily been gaining momentum over the past few years, but it has begun picking up steam at a faster rate as of late. The consequent expansion of consumer choice with regard to repair has guaranteed that smartphones get an extended lifespan and greater use value.

The IDC highlights this as the most prominent reason for the used phone market’s recent growth. “Increased smartphone prices at the high end of the spectrum has led to many consumers holding on to their phones longer than expected,” they report. This also means that upgrading to relatively recent phones sold at a cheaper rate – i.e., refurbished smartphones – had become the more appealing option as of late.

However, only 25 percent of devices are making it back onto the market, which is still low. We hear a lot about planned obsolescence in our devices preventing enjoyable usage beyond the 18-24 months, and that may be one reason that 75 percent of devices don’t get put back on the market, along with hand-me-downs to family and friends not being tracked.

But with the sector booming, it might be time to consider the resale value of your current device, and how your next device’s value will hold up. It’s a safe bet to say that if the industry continues to struggle to create real innovation, and important elements like cameras and screens only go from very good to very very good, we’ll continue to see second-hand smartphones as genuinely good options.

For the industry that needs to keep selling premium devices, the pressure is on to make the high-end market continually enviable for those with last year’s models, and convince the mid-range community not to simply buy those used flagships instead.

With the world’s largest exhibition for the mobile industry,  Mobile World Congress Americas show quickly approaching on September 12-14 in Los Angeles, we can expect many more high end devices to hit the market and it will be interesting to see how the refurbished phone market will be impacted. PR Newswire predicts that premium brand refurbished and used mobile phones will remain highly sought after in the market, with sales expanding at a high single-digit CAGR through 2025. While sales of mid-priced brand refurbished and used mobile phones will account for comparatively higher revenue than low-priced brand, and comparatively lower revenue than premium brand by 2025-end.