What many people don’t know is that there’s still a lucrative market for their old electronics.

Freecycling is a more environmentally friendly way to keep these items out of the landfill. Rather than throwing your items away or stashing them in a junk drawer, hand them to someone who really needs it. There’s no need to stash or trash when there are other options for old electronics.

Buyers who don’t necessarily have to have the latest gadgets on the market are more than happy to take on items others would consider outdated junk. Last year’s model tablets, smartphones and laptops are still fairly popular, and can easily be reused. Even in poor condition, electronics refurbishment has given many a gadget a second chance.

With the help of certified mobile and IT asset managers, devices and equipment are able to be refurbished back to proper working conditions and sold online at a fraction of the cost, when they would otherwise be tossed into the landfill.

It is predicted that by 2017, the volume of discarded e-waste worldwide is expected to be 33% higher than in 2012 and weigh the equivalent of eight of the Great Pyramids of Egypt. Another report from UNEP states that the amount of e-waste being produced – including mobile phones and computers – could rise by as much as 500% over the next decade in some countries such as India.

Dumping electronics in landfills is not ideal and is banned in some countries and even states in the U.S., including Colorado and Illinois. In fact, e-waste represents 2% of America’s trash in landfills, but an astonishing 70% of overall toxic waste. Not only the shell of the device is considered e-waste; it’s really what’s in the electronics that matters. The U.S. EPA estimates that recycling 1 million mobile phones reclaims 35,274 pounds of copper, 772 pounds of silver, 75 pounds of gold, and 33 pounds of palladium. If irresponsibly recycled, these substances can lead to health problems if burned or leeched into the soil.

However, some areas around the U.S. do not accept certain materials in their landfills, leaving citizens to figure out disposal on their own. Colorado for example has left the burden of CRT glass recycling, commonly found in old TV and computer screens, at the hands of its citizens. Many thrift stores and even recycling firms are refusing to accept CRT/TVs for recycling, feeling that by taking on the burden of properly recycling this material will be costly and lead to the risk of a stockpile. A massive stockpile of CRT glass would cost between $85 and $360 million to dispose of because the old equipment bares little to no return value.

In these extreme cases, consumers have found ‘upcycling’ very useful. This is the process of converting e-waste or obsolete products into new materials or products of better quality or for better environmental value. P 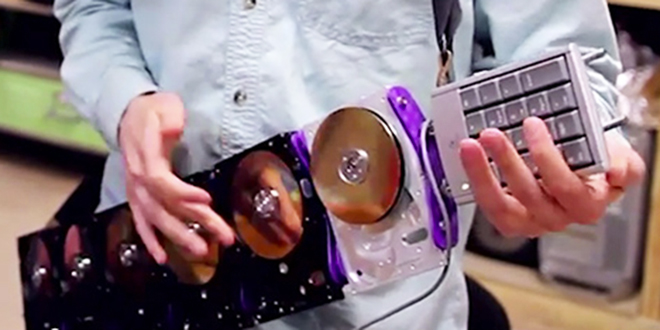 eople have taken outdated computer monitors and turned them into fish tanks. A savvy, Illinois musician gave a new meaning to the term metal head when he pushed the boundaries with his project called Electronic Waste Orchestra. By hacking together what he calls the Hard Rock Guitar out of e-waste, six obsolete hard drives, and an old keyboard number pad, powered by an Arduino board, he is able to produce a range of synthesized, ambient tones.

Certified ITAD vendors realize the detrimental affects of CRT material to the environment and have continued to find ways to responsibly recycle it.

Whichever channel you choose to freecycle, from donating it to be responsibly refurbished or giving it to a friend in need, this innovative method takes the burden away from you as well as the environment.