Four versions of the Samsung Galaxy S10 have “leaked” 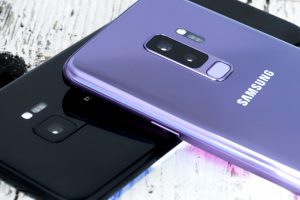 Thanks to an intentional “slip-up” by Samsung, four versions of their upcoming Galaxy S10 phone have leaked. And consumers are pretty impressed so far. Seeing as how this is the South Korean tech giant’s 10th anniversary device, many were expecting a pretty radical redesign but it seems Samsung is going to deck out the anniversary model with some pretty advanced features like a triple rear camera, ultrasonic in-display reader, fast updates and a proper rival to Apple’s FaceID.

Benchmark testing information that was leaked and picked up by Ice Universe, a twitter handler that often provides commentary on Samsung Galaxy leaks, experts are saying that we can expect even more innovative features from all models of the upcoming Galaxy flagship.

The test reveals that the Galaxy S10 has a new 19:9 aspect ratio and potential 3,040×1,440-pixel display. This pretty much confirms the previous reports that said Samsung was looking to supersize the S10 without making the it physically any bigger. Instead of making the new model ridiculously huge (and too similar in size to their other flagship, the Note 9) they have opted to make the screen larger by basically eradicating top and bottom bezels — meaning the front of the device is edge-to-edge screen.

Other aspects gathered from the leaked testing shows that the device will be the first Samsung phone to be powered by next-generation 7-nanometer chips. These new chips pack far more transistors into a much smaller space, and they’re more powerful and more efficient than anything found in phones right now. In addition to 7nm Snapdragon and Exynos SoCs, the Galaxy S10 will also feature a faster RAM and flash storage chips that offer further improvements.

Impressive Super AMOLED displays as well as triple-lens cameras will also be in the cards for the Galaxy S10. The larger Galaxy S10+ model will reportedly have a dual-lens front-facing camera as well, giving it five different camera lenses in total. Both the Galaxy S10+ and the smaller Galaxy S10 are said to feature an ultrasonic fingerprint sensor as well. This new type of sensor can be embedded behind the display, so users need to simply touch a finger to the screen in order to unlock a phone or authenticate a payment.

There’s indeed plenty in store for Samsung fans next year and the company is just starting to get the market hyped about what’s to come. Following the trend of their other devices, the Galaxy S10 leak actually came directly from Samsung itself, and it was the xda-developers blog that caught the slip up.

The XML files were found inside Samsung’s Android 9.0 Pie update file for the Galaxy S9+. For those who haven’t been following, “Beyond” is known to be Samsung’s internal codename for the upcoming new Galaxy S10. With that in mind, what you see above is indisputable evidence of four different versions of the Galaxy S10. Here’s a breakdown:

Samsung’s new Galaxy S10 lineup is expected to be unveiled as early as January next year at the CES 2019 trade show in Las Vegas. From the looks of it, there will be something for everyone when the phones are released later in the first quarter.