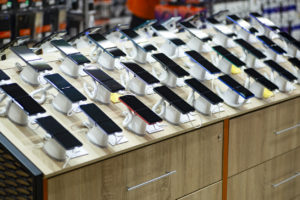 It’s no secret that prices are high these days. Everything from gas to groceries has gone up, and the electronics industry has seen a decline in smartphone shipments compared to this time last year. Smartphone shipments worldwide are down 9% during the year’s second quarter. According to research conducted by global technology market analyst, Canalys, the decline is due to “economic headwinds and regional uncertainty.”

Canalys research analyst, Runa Bjorhvde explained that, “the oversupplied mid-range is an exposed segment for vendors to focus on adjusting new launches, as budget-constrained consumers shift their device purchases toward the lower end.”

According to Bjorhovde, “Vendors were forced to review their tactics in Q2 as the outlook for the smartphone market became more cautious. Economic headwinds, sluggish demand and inventory pileup have resulted in vendors rapidly reassessing their portfolio strategies for the rest of 2022.”

Another analyst, Toby Zhu said that there are issues with logistics and production despite component supply backups and cost pressures beginning to ease. Issues such as emerging markets tightening import laws and customs procedures delaying shipments could also be the cause of the drop.

According to Zhu, “In the near term, vendors will look to accelerate sell-through using promotions and offers ahead of new launches during the holiday season to alleviate the channel’s liquidity pressure.” He also added that “in contrast to last year’s pent-up demand, consumers’ disposable income has been affected by soaring inflation this year.”