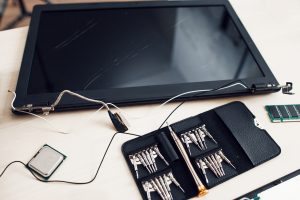 A group of Taiwanese developers from the Taiwan-based Industrial Technology Research Institute (ITRI), which is the country’s largest and leading high-tech applied research institution, has announced a recycling system, the LCD Waste Recycling System, to recover glass, and heavy metals such as indium and liquid crystal from LCD screens.

Since the early 2000s, LCD screens have been used in a wide range of electronic products, including TVs, smartphones, and tablets. However, these screens are now dated by ever-improving models and a better grade of LCD. Earlier model LCD devices used cold cathode fluorescent lamps (CCFLs), which contained mercury. And disposing of these LCD screens has become a real challenge. Putting the LCD screens in landfills will only lead to groundwater and soil pollution, while incinerating the screens will release air pollution.

Lu Chien-Wei, a researcher for ITRI, believes that ITRI’s recycling system could be a key recovery option when it comes to handling LCD screens for North American processors.

The press release from ITRI describes the multi-step system will crush the glass, extract and purify the liquid crystal and will remove and concentrate indium content. ITRI states that the equipment can handle up to three metric tons per day and will produce up to $32,000 in revenue daily. However, more than half of this revenue will be found in glass, a hard-to-recycle commodity for U.S. e-scrap firms. Since recycled glass in the U.S. currently has little to no value, Chien-Wei comments that government support is expected in order to make the LCD recycling solution successful. The remaining amount of revenue will at large come from sales of liquid crystal and only a small amount from selling recovered indium.

Since ITRI’s announcement of the recycling system, some have pointed out that while the recovery technology to deploy the system is sound, a major potential issue could be the lack of downstream markets for the separated materials. Billy Johnson, chief lobbyist at the Institute of Scrap Recycling (ISRI), noted that the LCD stream might not be substantial enough to drive U.S. processors to invest in the technology.

However, ITRI has confirmed to have at least one investor. According to Chien-Wei, Fortune WEEE Solution Inc., a branch of Fortune Group, Inc. that has multiple R2-certified facilities in the U.S., has invested $2.5 million to acquire the use of the technology in the U.S.

Currently, a pilot system operated by ITRI is being deployed and costs an estimated $2,000 to operate one ton of LCD panels. Chien-Wei reports that the system recovered three kilograms of liquid crystal, 750 grams of indium, and about 2,550 kilograms of glass.

According to Huan-Yi Hung, Deputy Director of ITRI’s Material and Chemical Research Laboratories, “E-waste is a problem that cannot be ignored. Every year, about 5,900 metric tons of LCD panels are discarded in Taiwan, and according to a United Nations Environment Program report titled ‘Waste Crime,’ 41.8 million metric tons of e-waste was generated globally in 2014. ITRI’S LCD Waste Recycling System completely resolves the environmental pollution challenges caused by waste LCD panels, and its business benefits for e-waste recycling downstream processing, high production yields, and scalability. It is the best way to process waste LCD panels.”