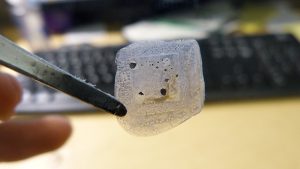 [Photo by: Cornell Chronicle “A polycarbonate shell 125 microns thick after a vaporization test of its embedded rubidium and sodium biflouride. The chemicals are capable of vaporizing thinned silicon-dioxide microchips packaged in the shell.”]

Engineers and researchers at Cornell have come up with a trick to make electronics disintegrate from afar. Using a piece of polycarbonate, the technology represents a new kind of transient electronic, which are designed to disappear when they’re no longer needed. In the case of mobile electronics, chemicals that can destroy the circuit stay sealed away until you unlock them with radio waves. This means that if a device containing these transient electronics were ever stolen or misplaced, users would be able to remotely order it to self-destruct, wiping it of any data and ensure that any sensitive information never gets into the wrong hands.

Amit Lal, a professor of electrical engineering at Cornell University and one of the researchers behind the new technology said, “It literally goes into the air. Very little remnants of [the device] are left behind. Many scientists who have been able to see the material are hoping to be able to use transient electronics in a number of industries. For instance, the use of this material would be extremely efficient in the building of medical implants that would be able to vanish instead of requiring surgical removal.

Other uses for the technology could be in environmental sciences where if they appeared in sensors deposited in forests and oceans to measure pollution or carbon dioxide levels, would reduce the need for scientists to have to go back and retrieve the equipment. However, some have pointed out that while transient electronics leave little to no evidence of material behind, there is still a risk of remaining material that could possibly contaminate the devices surrounding area.

Previously, other researchers have reported designing transient electronics that would be able to use water or heat to initiate the self-destruction mode. However, by not having control of the elements that could lead the technology to vaporize, there are too many drawbacks to this approach. Therefore, Lal says the Cornell team aimed to create a transient technology that would allow for more control.

The design consists of a microchip embedded in a polycarbonate shell. Inside the shell are tiny cavities filled with metals such as rubidium and cesium. These metals react with oxygen, and are the key to destroying the chip. “You can effectively think of it as a self-triggered fuel,” Lal says. “Unlike gasoline, where you need a match to light it up, here you just expose it to air and it will instantaneously begin to react.”

Most of the time, the metals are barricaded behind membranes made from graphene and silicon nitride. To unleash them, the researchers send a radio signal to the chip. The chip then passes an electric current from its battery though the membrane. This warms the graphene up, making it expand until it cracks the silicon nitride. Then air can rush in and begin reacting with the metals. Heat from this chemical reaction pours into the plastic shell, breaking and finally vaporizing it.

As the shell cracks, it can shatter the microchip as well. “Once you heat this stuff up, there’s enough stress in it to break up the chip into tiny, tiny pieces,” Lal says. He’s also experimenting with chemicals that form hydrofluoric acid when heated to etch away at the chip.

In December, the team behind the revolutionizing technology was issued a patent and the team hopes to be able to deploy the technology soon.