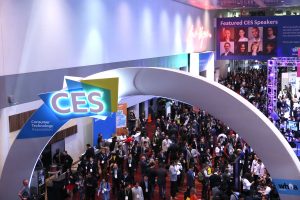 Now that CES 2018 has come and pass, it’s the perfect time to take a look at the innovative technology that had people buzzing at the show. Spanning across 11 official venues, CES 2018 took up more than 2.5 million net square feet of exhibit space and featured over 4,500 exhibitors, and with more than a hundred thousand attendees, it’s extremely easy to confirm CES as the world’s largest technology show. That said, the show had an impressive line up of enterprises ready to show what consumer technology they had in store for the coming years. Here is a glance at some of the most talked about gadgets CES 2018 had on display.

From day one of the show, South Korean multinational conglomerate corporation, LG made a big impression. Displaying the prototype in its early stages, LG exhibited a ‘rollable’ 4K OLED screen. Despite not being the biggest television at CES, or even at LG Displays showroom, the screen’s selling point is its ability to roll itself into a box a fraction of its size. As we’ve seen with mobile phones, the push for bigger tvs has become the norm. However, the bigger tvs are, the more unwieldy they become. Huge screens more than often tend to be a huge pain to install, get delivered and move, and LG has aimed to reduce this dilemma. Alas, the impressively thin and vibrant screen lacks a sufficient sound system, which is understandable given the thinness of the display. One critic from popular online technology news publication Tom’s Guide, wrote in an article, “LG’s Signature W7 Wallpaper TV, and it’s W8 successor, both connect to a soundbar base. So it’s not difficult to imagine a base for the rollable OLED set eventually doubling as a soundbar.” Nevertheless, the idea of an easily portable high definition OLED 4K television has many excited.

While LG may have wowed people in their more than impressive Displays showroom, unfortunately the company’s introduction of CLOi, an adorably designed home assistant robot, was a huge flop. When David VanderWaal, vice president of marketing for LG USA, gave CLOi a few commands on CES’ opening stage, CLOi easily answered two of his commands before going silent. After two commands, which involved turning on a washing machine and setting a schedule, CLOi seemed to get ‘stage fright’ as many media outlets are dubbing the incident. While CLOi may need some tweaking, we can see that LG has created an amazing product with great potential.

Another mega hit at the show was Razer’s Project Linda, which displays a companion piece of hardware for the recently released Razer Phone that extends the smartphone into a full laptop. The Razer company is known to focus on gaming aspects of devices. Essentially, Razer took the chassis of its Blade Stealth ultrabook, removed a majority of the internals, and replaced the trackpad with a slot for the company’s flagship phone, the Razer Phone. The company aims to revolutionize the gaming world, and with a prototype based on the Nintendo Switch console, Project Linda aims to consolidate gaming on the go and gaming at home. However, the project is very much in its early stages as one critic in an article for Quartz Media, all three models of Project Linda had not set-up the smartphone to be a fully-functioning trackpad and required the use of an external mouse.

Following the trend of the past few years, CES 2018 had many home assistant speakers and displays that attracted a good amount of attention. One that received an extraordinary amount of buzz for its innovation was the Lenovo Smart Display integrated with Google Assistant. Built very similarly to a tablet with large speakers, the Lenovo Smart Display is equipped with a full HD display, available in eight or ten inch display options, that has accessibility to Google functions such as weather and maps, as well as YouTube and more. Backed by the Qualcomm Home Hub Platform, which was also announced at CES 2018, the device has an integrated CPU, GPU, and DPS plus Wi-Fi and Bluetooth connectivity. Beginning at $199.99 for the smaller model, the Lenovo Smart Displays will go on sale by early summer. Critics expect the display to be a huge game changer in smart assistants and may quickly overtake the longstanding reign of Amazon’s Echo due to the HD screen on the Lenovo Smart Display.

One last piece of technology that had many excited to get their hands on at CES 2018 was Vivo’s in-display fingerprint scanner. For the past year many have been anticipating an announcement from Apple or Samsung to be the first company to claim this futuristic and innovative technology. No one expected Vivo, a Chinese technology company, to be the one to beat out the top two mobile phone manufacturers. Vivo worked in conjunction with Synaptics to create the technology that would allow consumers to literally be able to access their phones with just a tap of a finger. Essentially, a user just has to place their finger on the display itself, where the outline of a fingerprint will appear, to be able to access the device. The technology completely removes the need for a button to unlock the device, thus allowing for a much larger screen. Thanks to this new sensor breakthrough, we are closer to a truly bezel-less smartphone. However, Vivo has not finalized its prototype, so we won’t be seeing this technology on the market anytime soon – at least by Vivo. Many critics expect Apple and Samsung to quickly catch up to Vivo and launch their own devices that have comparable technology.

Needless to say, CES 2018 lived up to the hype. The show has undoubtedly set the tone for things to come in the next 12 months and promises a good year of consumer technology. Now we have to wait and see what amazing advances in smartphones the 2018 Mobile World Congress (MWC) show in Barcelona on Feb. 26 has to show us!