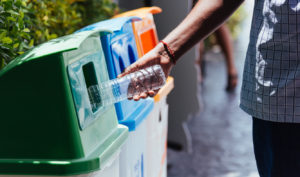 The plastic waste crisis has been a global concern for a while now, with so many materials and products being made from plastic. Almost everything we use is either plastic, contains plastic, or contains plastic packaging, which typically ends up in landfills or the ocean and harms sea life. Plastic bags, straws, plastic packaging, plastic soda can rings etc. all contribute to the plastic waste problem, and during the pandemic a new source of plastic waste was created in the form of plastic at-home COVID tests. However, a solution may have been found.

When the pandemic first began the demand for COVID tests were so high that the primary focus was to get them made and make them available as quickly as possible, and now we have COVID tests we can take from the safety of our homes. However, the large amount of disposable at-home COVID tests were made from single-use plastic, and are now contributing to the global plastic waste crisis. Consumers have even questioned the level of accuracy because some positive tests receive very dark lines while others receive only the faintest shadow of a second line, leaving many to wonder if they have the virus or not. Each at-home test is thrown out with municipal waste once it’s been taken, and with the rise of cases during allergy season, professionals in the industry realized they might need to take a different approach.

London-based studio, Marrama, proposed a rapid biodegradable COVID test that is also recyclable, packaging included. The tests would be made from recyclable paper pulp, with changes to accessibility as well. The new test would abandon the previous method of painful nose swabbing, as well as the faint pink lines, in favor of a more user-friendly approach. Jo Barnard, studio founder of Marrama, says new technology allows for the paper to be molded without being wetted, which could make the process faster and cost equivalent to PET plastic.

Instead of nose swabs, Eco-Flo would use saliva samples by having users spit into a “saliva dish.” Rather than a faint, often indiscernible, pink line, users would be presented with two checkboxes. One box would confirm the validity of the test, and the other would confirm the results.

Due to availability of PASPORT testing for consumers, no prototypes have been made as of yet. Eco-Flo may still be a ways in the future, but according to Barnard, it’s the idea that will make a difference. “We can’t save people’s lives and simultaneously affect them later on with global warming.” She stated, “We know these kinds of things happen, so let’s be prepared for them next time, so we can just roll it out.”