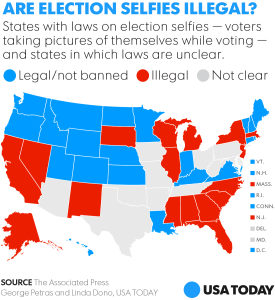 Social media enthusiasts around the country are finding Instagram and Snapchat in the voting booth can result in legal action.

Taking a “ballot selfie” or any other kind of photograph inside a voting booth can result in fines and/or vote revocation. While there are severe consequences for ballot photos in some states, including California, they are perfectly legal in some states, such as Hawaii. Other states, like Texas, have no clearly established legislation for voting pictures.

This map from USA Today outlines the states that allow ballot selfies, along with states where these type of pictures are illegal, and state where legislation regarding the matter is unclear.

While there are laws in place against ballot selfies in many states, officials do not necessarily pursue legal action. Although legal action may not be pursued, it’s encouraged for voters to avoid any photo documentation of the voting process in anti-ballot selfie states and states with unclear legislation.