Are Passwords Being Replaced? 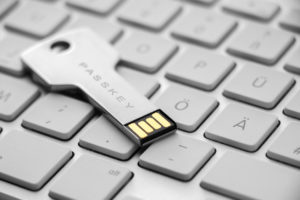 Passwords have been the standard for keeping data protected for years. During the last few years technology has evolved, and developers created Touch ID as a more secure method of data security by removing the need to type in a password. Now it seems as though passwords are on their way out altogether. FIDO Authentication technology has taken it a step further and removed the need for a password at all. Soon the days of creating a dozen unique passwords only to forget them all will be ancient history, replaced by the development of passkeys.

Created by a large group of tech companies, FIDO Alliance has been developing a new standard for data security by getting rid of passwords altogether, and is now considered the “gold standard” for multi-factor authentication (MFA) by the U.S. Government’s Cybersecurity and Infrastructure Security Agency (CISA).

Passkeys are end-to-end encrypted digital keys stored on your device and designed to work with Touch ID and Face ID for a more secure login experience. Described by Apple as a replacement for passwords, passkeys are essentially a new credential that uses public key cryptography. The operating system creates a unique cryptographic key pair generated by the device to associate with an account for the app or website. One of the keys is public and stored on the server, and one is private and needed for the actual sign-in process. According to Apple, the server never learns what the private key is, and the key is synced across all of your devices.

Though not Apple-exclusive, the tech giant was the first to announce an implementation of the passkey across devices, and other tech companies like Microsoft and Google have said they plan to begin using the technology as well. The idea of the passkey is to eliminate the need for passwords and to create a safer, more secure login experience.

Tech companies across the board including Apple have assured consumers that passkeys are much safer and easier to use than regular passwords, but some users remain skeptical. However, the decision will primarily be up to user preference.

Passkeys will be available on iOS 16, which will be announced during Apple’s Fall keynote airing September 7, 2022.