The new MacBook Air devices will be available in Space Grey, Gold and Silver.

Apple unveiled a lineup of new Macs and iPads, including an upgraded MacBook Air, Mac Mini and larger iPad at a rare East Coast event on Tuesday.

The product launch at the Brooklyn Academy of Music took place six weeks after the company rolled out its new iPhone and Watch line during their annual September keynote.

The new MacBook Air will feature a high-definition “Retina” display, longer battery life and a bigger screen and trackpad. Like the iPhone, it is able to be unlocked using TouchID. It is also slightly lighter than the previous model, weighing in at 2.75 pounds, and has a starting retail price of $1,200.

The Mac Mini, with a base price of $800, will come standard with flash (solid-state) memory and a quad-core processor. The cases for both computers are made entirely of recycled aluminum. 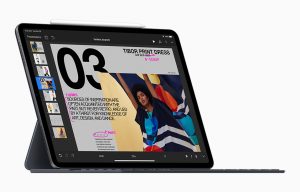 The new iPad Pro showcased with the latest Apple Pencil wirelessly charging, attached via a magnet and the new Smart Keyboard folio, which is attached magnetically and allows for two viewing angles.

Apple also introduced a major iPad upgrade, including a larger iPad Pro with many features that mirroring those from the iPhone X. The largest model, which sells for $1,000, is under 6 millimeters thick and measures 12.9 inches across–nearly the same size as a standard sheet of paper. It does away with the “home” button in favor of swiping gestures that have become standard on the iPhone X, and feature a USB-C connector allowing the attachment of iPhones or cameras. The device will use FaceID to unlock.

Starting next year, the iPad Pro will also support a fully functioning version of Adobe Photoshop.

The upgrade comes as the number of iPads sold reaches 400 million globally, according to Apple CEO Tim Cook. “We’ve sold more iPads in the last year than the entire notebook lineup of all the biggest notebook manufacturers,” he said onstage at the event, noting that the device was “faster than 92 percent of portable computers.”