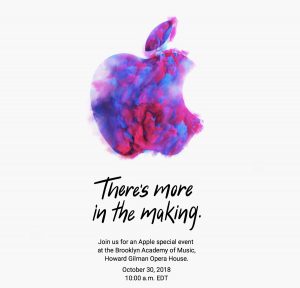 Looks like your wallets won’t be getting a break this holiday season. A month and a half after its last major event, Apple’s will be holding yet another event in Brooklyn on Tuesday, October 30. The event will likely showcase some of the technology that slipped through the cracks back in September, including, most likely a new iPad and possibly some updates in hardware to the Mac line.

The company hasn’t released any more information about what we can expect from the event, other than the tag lie, “There’s more in the making.” This appears to be a nod to both the “one more thing” aspect of this late in the season even, along with the company’s new found refocus on creative professionals.

Likely, we’ll see a new version of the iPad Pro. While the iPad Pro is expected to continue to use an LCD rather than OLED due to the high price of OLED displays, rumors suggest it could adopt a USB-C port instead of a Lightning port and that the headphone jack could potentially be eliminated.

And if we’re lucky, we could even sneak a peek at the upcoming refresh of the Mac Pro, which is set to arrive early next year.

Refreshed 12-inch MacBooks are said to be in the works, and based on rumors, Apple has developed a low-cost notebook with a Retina display that could be positioned as an updated MacBook Air.

The Mac mini, which has not been updated for more than 1,400 days, is expected to be refreshed for the first time since 2014. We don’t know a lot about what to expect for the Mac mini update, but upgraded internals and faster processors are a sure thing.

It’s possible that at this iPad and Mac-focused event, we’ll also hear more about the modular Mac Pro that Apple is working on for a 2019 debut.