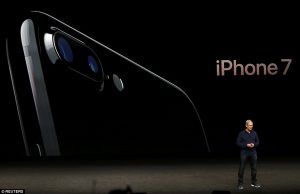 Apple kicked off their event with an update to Apple Music and then followed with the official announcement that Nintendo is joining the App store with a new game designed exclusively for the App Store, Super Mario Run. This is the first time Nintendo has designed any kind of game for smartphone use. Along with the new Nintendo collaboration, Apple revealed Pokemon Go will now be compatible with Apple Watch.

Tim Cook, CEO, then announced the ConnectED initiative and revealed new updates to iWork. ConnectED is a national initiative combining government and tech companies to bring technology to underserved schools.  The newest version of Apple’s iWork suite will have the capability for multiple users to update documents simultaneously, making iWork a stronger competitor towards Google Docs.

Apple then moved on to showcase the new Apple Watch Series 2, the second generation version of Apple’s wearable device they revealed last year. The initial Apple Watch, now called Apple Watch Series 1, is still available for a lower price, but with a cheaper processor. The Series 2 is designed almost identically to its predecessor, but now includes a water-resistant shell and GPS chip so the device can be worn while swimming, and no longer requires a phone for mapping.

After the Watch reveal, Apple unveiled the latest iteration of  the iPhone. The iPhone 7 is very similar to the 6S in appearance, but will come in a new glossy matte model, along with the traditional gold, rose gold, silver and matte black options. The new device is also water and dust resistant, and could possibly be dropped into shallow water.

The new design confirmed many rumors that had been flying over the summer. Apple ditched the headphone jack for stereo speakers, and new earbuds that can be attached via Lightning port, or new wireless earbuds called AirPods. Along with no longer having a headphone jack, the new device hosts two 12-megapixel cameras on the back of the device. Most notably, the iPhone 7 reportedly has the best battery life of any iPhone, thanks to the new A10 fusion processor.

Hate robocalls? AT&T says it will start blocking them in the coming months
July 17, 2019
Leave Comment