Apple rumored to release a cheaper iPhone model in mid-2018 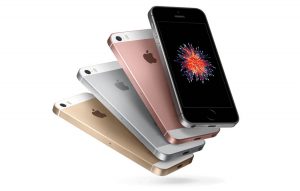 Recent reports suggest that Apple could be releasing the iPhone SE 2 by July 2018 at a more affordable price than their latest iPhone launch. In 2016, Apple launched the iPhone SE, which stands for “Special Edition,” and showed consumers a new side to the company: one that revives old, unchanged designs. Promoted alongside the iPhone 6s and 6 Plus, the SE was geared towards consumers who demanded a smaller, simplified and less-expensive mobile phone – a legion of consumers that still persist among the ever-growing mobile phone models.

In terms of pricing, the SE 2 is likely to remain Apple’s most affordable iPhone moving forward. The only pricing rumor so far points to a roughly $450 price tag. The original SE model was available at $399 for a 16GB handset, but has since discontinued the 16GB model and now starts at $349 for a 32GB. Due to the jump in price, reports speculate that the iPhone SE 2 could look drastically different than its predecessor.

With Apple’s newest phones, the iPhone 8 and iPhone X, both sporting an all-glass back plate, the SE 2 is speculated to also have this feature. The model is also rumored to have a quad-core A10 chipset, 2GB of RAM, a 12MP rear camera, a 5MP front-facing camera, a 4.0-inch screen, and could be available in 32GB and 128GB sizes. It is also likely the phone will have a more powerful processor to run Apple’s new iOS 11 operating system. Thus making the rumored SE 2 roughly be in line with the iPhone 7, albeit with a smaller screen.

Many critics have come out to say that they hope Apple stays true to the idea behind the original SE model – which was to have a simple and easy to function smartphone. Therefore, a majority of the critics are hoping for the iPhone SE 2 to keep the headphone jack and a modern variation of the familiar “boxy” design of the iPhone 5 but with an updated system.