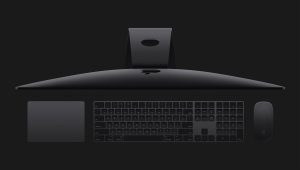 Yesterday, Apple announced the iMac Pro, the professional grade version of the company’s all-in-one, would be available for sale Dec. 14. The desktop was first revealed at the Apple Worldwide Developers Conference (WWDC) with little information promoting it other than a vague December release date. However, Apple suddenly announced the release of the highly anticipated desktop on their website just two days before they become available for online sales.

Just in time for the holiday season, the iMac Pro begins at $4,999 and is said to be the company’s most powerful all-in-one. The line’s high-end model sports an impressive 18-core Xeon processor, 128GB of memory and four TB of storage. The desktop will also come equipped with a 27-inch 5K display with 500 nits brightness and P3 color, error-correcting ECC RAM, 10-gigabit Ethernet, pro-grade AMD Radeon Pro Vega GPUs, and four Thunderbolt 3 (USB-C) ports. Hoping to entice creative professionals, the device is capable of high performance tasks like editing 4K video and 3D graphics. The device is also capable of supporting VR playback and Apple will introduce Metal for VR, in hopes the machines will become key players in the creation of virtual reality content.

Well-known photographer Vincent LaForet has been testing the machine for the past week week and told online publisher of technology news, TechCrunch, “I found a very consistent set of results: a 2X to 3X boost in speed (relative to my current Mac and MacBook Pro 15”) which is a noticeable leap from most generational jumps that are generally ten times smaller.”

Craig A. Hunter, a mechanical/aerospace engineer now running an iOS/Mac app development company told TechCrunch, “The nearest comparable 26-inch iMac I configured was $3,699 but with a greatly inferior CPU and graphics chipset, four fewer cores, and other disadvantages across the board. So in that context, spending another $1,300 to get into an iMac Pro is a no brainer.”

In other words, the iMac Pro, while being very expensive, is extremely good at what it does. The $4,999 entry-level model sports an eight-core Xeon processor, one TB of storage and 32GB of RAM – which is probably well beyond the needs of most users. The new system is an attempt to push one of Apple’s most popular lines into a brand new category, all while embracing a longtime core audience.