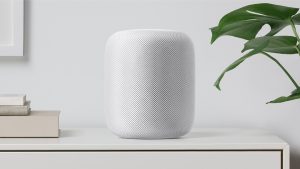 Originally expected to launch in early December, Apple’s release of HomePod is being pushed back to early 2018 for the U.S., UK and Australian markets. Apple announced the expected delay on Nov. 17 and stated, “We can’t wait for people to experience HomePod, Apple’s breakthrough wireless speaker for the home, but we need a little more time before it’s ready for our customers.”

Priced at $349, the HomePod is slated to take on high-end sound systems like Sonos, as well as smart assistants like the Amazon Echo and Google Home. The cylindrical speaker features a seven-speaker array of tweeters, a four-inch subwoofer, and a six-microphone array, which may categorize it as the best speakers in its price range. It also hooks into Siri for its smart functions and will work with Apple’s smart home platform, HomeKit and Apple Music. However, critics expect the speaker to fall short to its competitors due to Siri being a less popular digital assistant in comparison to Amazon’s Alexa and Google Assistant, both of whom dominated the market this past year. This is a good indicator as to why Apple has promoted the HomePod as a “music first and smart features second” device.

With no specific cause for the delay, many tech experts speculate that the HomePod launch must need a significant amount of re-working if Apple is willing to miss out on the impending shopping rush of the holiday season, and expect that it will be awhile before we can see the HomePod hit the shelves any time soon.