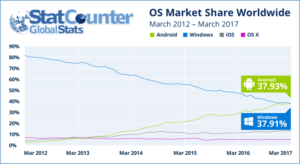 Research firm Statcounter reports Android has surpassed Windows as the OS used to access the Internet the most frequently. This month, Android users accounted for 37.93 percent of Statcounter network activity, followed closely behind by Microsoft users with 37.91 percent.

While .02 percent is not a large difference, it signifies a tipping point between mobile and desktop Internet usage. More users are choosing to utilize smartphones and tablets as their primary computing devices instead of desktop and laptop computers. Android is the most popular operating system worldwide, and the number of users accessing the Internet through Android devices will continue to grow in the future.