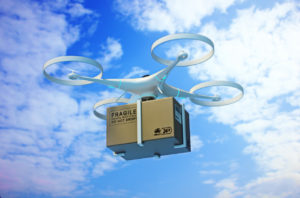 Imagine your Amazon packages floating right to your backyard in the metal arms of a drone. As Amazon prepared to finally launch its drone delivery services, that future may not be too far off. After many years of promises and technical obstacles, Amazon recently announced it would be launching the long awaited service later this year in Lockeford, California.

The company originally announced the drone services in 2013 via a statement from former CEO Jeff Bezos, and previewed a redesign of the drones in 2019. Neither announcement resulted in the promised services, and several Amazon workers raised safety concerns over how the program was being rushed. However, after years of delays including five crashes over a four month period, the company seems hopeful that the third time will be the charm. According to the company, technology is in development to improve obstacle avoidance on the ground and in the air, as well as enabling drones to operate Beyond the Visual Line of Sight (BVLOS).

Despite positivity in the program’s release, there is one obstacle yet to be overcome in the process. Much like companies that fly commercial aircrafts, drone delivery companies must be certified by the FAA and receive the agency’s Part 135 certification that enables companies to operate commercial drone services. So far Amazon has been approved to operate its drones, but still awaits commercial operation certification.

The company has stated that thousands of packages will be eligible for drone delivery, with some weight restrictions, starting later this year in California.